Association Croquet (“AC”) is the traditional form of the popular garden game.  It is best described as a “race” in which the players attempt to be the first to complete the course of hoops and the peg with both balls of their side.  Progress is made by striking a ball with a mallet and propelling the balls through hoops in a specified order.  AC is based on the concept of a “break” (as in snooker, billiards and pool) in which the right may be earned to play a sucession of extra strokes.  It is possible to play a break of up to 91 strokes in which the striker’s ball will have been made to pass through twelve hoops and then strike the centre peg.

For a more detailed description of the game, see What is Association Croquet?

The oldest document to bear the word croquet with a description of the modern game of Association Croquet (“AC”) is the set of rules registered by Isaac Spratt in November 1856 with the Stationers’ Company in London. This record is now in the Public Record Office. In 1868 the first croquet all-comers’ meeting was held at Moreton-in-Marsh, Gloucestershire and in the same year the All England Croquet Club was formed at Wimbledon, London.

In the book Queen of Games: The History of Croquet, Nicky Smith presents two theories of the origin of the modern game that took England by storm in the 1860s and then spread overseas.

The first explanation is that the ancestral game was introduced to Britain from France during the reign of Charles II of England (1660-1685), and was played under the name of paille-maille or pall mall, derived ultimately from Latin words for “ball and mallet“.  This was the explanation given in the ninth edition of Encyclopaedia Britannica, dated 1877.  In his 1810 book,  The Sports and Pastimes of the People of England, Joseph Strutt describes the way pall mall was played in England in the early 17th century: “Pale-maille is a game wherein a round box ball is struck with a mallet through a high arch of iron, which he that can do at the fewest blows, or at the number agreed upon, wins.  It is to be observed, that there are two of these arches, that is one at either end of the alley.  The game of mall was a fashionable amusement in the reign of Charles the Second, and the walk in Saint James’s Park, now called the Mall, received its name from having been appropriated to the purpose of playing at mall, where Charles himself and his courtiers frequently exercised themselves in the practice of this pastime.”

Whilst the name pall mall and various games bearing this name may have been played elsewhere (e.g. France and Italy), the description above suggests that the croquet-like games were certainly popular in England as early as 1611.  Some early sources refer to pall mall being played over a large distance (as in golf), however an image in Strutt’s 1801 book shows a croquet-like ground billiards game (balls on ground, hoop, bats and peg) being played over a short, garden-sized distance.  The image’s caption describes the game as “a curious ancient pastime”, confirming that croquet games were not new in early nineteenth century England.

Early croquet-like game from The Sports and Pastimes of the people of England, first published 1801. Hoop, peg and two players with balls clearly shown.

In Samuel Johnson‘s 1755 dictionary, his definition of “pall mall” clearly describes a game with similarities to modern croquet: “A play in which the ball is struck with a mallet through an iron ring”.  However, there is no evidence that pall mall involved the croquet stroke which is the distinguishing characteristic of the modern game.

The second theory is that the rules of the modern game of croquet arrived from Ireland during the 1850s, perhaps after being brought there from Brittany where a similar game was played on the beaches.  Records show the similar game of “crookey” being played at Castlebellingham in 1834, which was introduced to Galway in 1835 and played on the bishop’s palace garden, and in the same year to the genteel Dublin suburb of Kingstown (today Dún Laoghaire) where it was first spelt as “croquet”. There is, however, no pre-1858 Irish document that describes the way game was played, in particular there is no reference to the distinctive croquet stroke.  The noted croquet historian, Dr. Prior, in his book of 1872, makes the categoric statement: “One thing only is certain: it is from Ireland that croquet came to England and it was on the lawn of the late Lord Lonsdale that it was first played in this country.” This was about 1851. 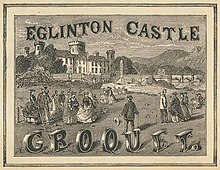 A game of Croquet being played atEglinton Castle, North Ayrshire, in the early 1860s

John Jaques apparently claimed in a letter to Arthur Lillie in 1873 that he had himself seen the game played in Ireland and, “I made the implements and published directions (such as they were) before Mr Spratt [mentioned above] introduced the subject to me”.  Whatever the truth of the matter, Jaques certainly played an important role in popularising the game, producing editions of the rules in 1857, 1860, and 1864.

Regardless when and by what route it reached England and the British colonies in its recognizable form, croquet is, like pall mall, trucco, jeu de mail and kolven, clearly a derivative of ground billiards which was popular in Western Europe back to at least the 14th century, with roots in classical antiquity.  The urge of homo sapiens to knock a round object with a stick towards some pre-determined target is easy to understand.

Croquet became highly popular as a social pastime in England during the 1860s. It was enthusiastically adopted and promoted by the Earl of Essex who held lavish croquet parties at Cassiobury House, his stately home in Watford, Hertfordshire, and the Earl even launched his own Cassiobury brand croquet set.  By 1867, Jaques had printed 65,000 copies of his Laws and Regulations of the game.  It quickly spread to other Anglophone countries, including Australia, Canada, New Zealand, South Africa, and the United States.  No doubt one of the attractions was that the game could be played by both sexes.  Amusingly, this aspect attracted adverse comment from the Boston clergy.

By the late 1870s, however, croquet had been eclipsed by another fashionable game, tennis, and many of the newly created croquet clubs, including the All-England club at Wimbledon, converted some or all of their lawns into tennis courts.  There was a revival in the 1890s, but from then onwards, croquet was always a minority sport, with national individual participation amounting to a few thousand players.  The All-England Lawn Tennis and Croquet Club remains a supporter of the game and still has a croquet lawn, but has not hosted any significant tournaments.  In 1989, it donated the Wimbledon Cup to the World Croquet Federation as the trophy for the Association Croquet World Championship.  The English headquarters for the game is now in Cheltenham.

The earliest known reference to croquet in Scotland is the booklet The Game of Croquet, its Laws and Regulations which was published in the mid-1860s for the proprietor of Eglinton Castle, the Earl of Eglinton. On the page facing the title page is a picture of Eglinton Castle with a game of “croquet” in full swing.

The croquet lawn existed on the northern terrace, between Eglinton Castle and the Lugton Water. The 13th Earl developed a variation on croquet named Captain Moreton’s Eglinton Castle croquet, which had small bells on the eight hoops “to ring the changes”, two pegs, a double hoop with a bell and two tunnels for the ball to pass through. In 1865 the ‘Rules of the Eglinton Castle and Cassiobury Croquet’ was published by Edmund Routledge. Several incomplete sets of this form of croquet are known to exist, and one complete set is still used for demonstration games in the West of Scotland.  It is not known why the earl named the game thus.

There are several variations of croquet currently played, differing in the scoring systems, order of shots, and layout (particularly in social games where play must be adapted to smaller-than-standard playing courts). The two forms of the game that have internationally-agreed rules are AC and Golf Croquet (“GC”) and are played in many countries around the world. The United States plays both AC and its own variant known as “USCA Rules” for its domestic games and competitions.  The principal differences between AC and USCA Rules is that the latter retains the concept of  “deadness” that is carried over from turn to turn  and it is not permitted to roquet a ball so that it leaves the court.  The effect on tactics is considerable.  Gateball, a team sport originated in Japan under the influence of croquet, is played by over a million people, mainly in East and Southeast Asia and in Australia and can also be regarded as a croquet variant.

As well as club-level games, there are regular regional, national and world championships and international matches between croquet-playing countries. The sport has particularly strong followings in Australia, Egypt (for GC), New Zealand, the United Kingdom and the United States.  Every four years, Australia, England, New Zealand and the USA contest the MacRobertson Shield which was established in 1925.  Many other countries also play. The current world team rankings show New Zealand in top place for AC, followed by England, Australia and the United States in fourth position.  The same four countries appear in the top six of the GC world team rankings below Egypt in top position, with South Africa at number five.

Croquet is popularly believed to be a “vicious” game. This may derive from the fact that (unlike in golf) players will often attempt to move their opponents’ balls to unfavourable positions. However, purely negative play is rarely a winning strategy.  In AC, successful players will attemt to use all four balls to set up a break for themselves, rather than simply making the game as difficult as possible for their opponents. At championship-standard AC, players often make all 26 points (13 for each ball) in two turns.

© 2022 . All rights reserved.Copyright by ARSAMLAND.